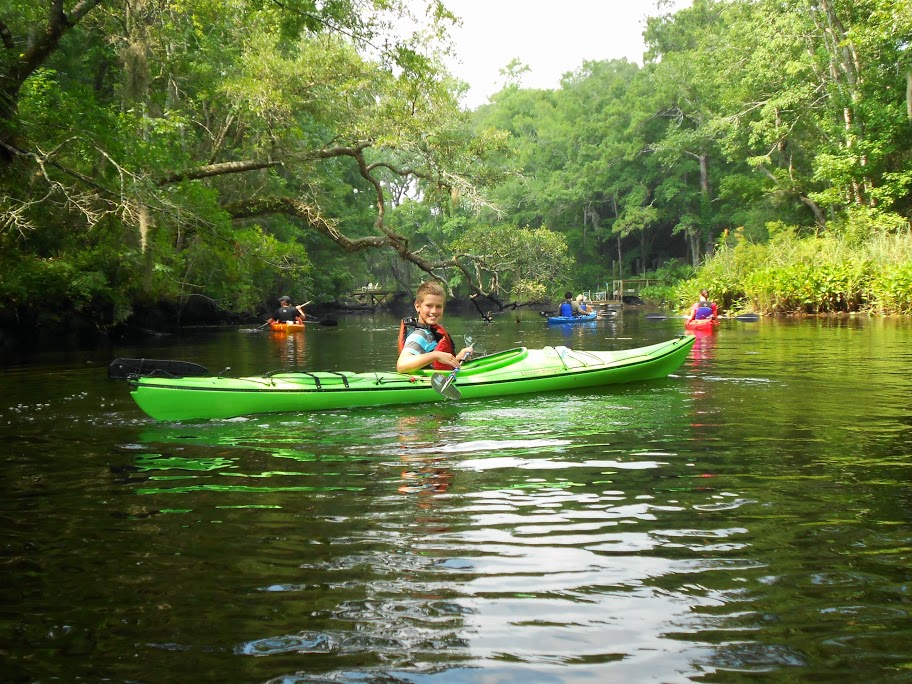 Amelia Island, and Nassau County, is home to some of the most interesting paddling in the region. Beaches and salt marsh provide scenic backdrops for many of the area’s trips; but Nassau County also features a trip reminiscent of parts of the Okefenokee Swamp. From still, blackwater creeks to the swift and turbulent waters of Cumberland Sound, Northeast Florida offers paddlers a wide variety of paddling venues – ranging from mild-to-wild.

Kayaking with Up The Creek Xpeditions is also the only way to get to Cumberland Island National Seashore from Amelia Island. As the area’s only outfitter meeting all the requirements for safely and legally taking visitors into the National Seashore, Up The Creek is a great alternative for Amelia visitors who don’t want to, or are not able to, drive to St. Marys, Georgia to take the Cumberland Island Ferry over to the island.

Some of the landscape and scenery is much as it was hundreds of years ago – giving paddlers a sense of travelling back in time. Whether kayaking across Cumberland Sound, drifting through the marshes of Egans Creek, or exploring the swamps of Yulee on Lofton Creek, if you’re paddling in Northeast Florida, you’re retracing the paths of Native Americans and intrepid explorers who travelled these waters centuries before.

An Island Rich in History

Amelia Island is one of the most historic places in the state of Florida, having flown under eight flags. First settled by Timucuan Indians, it was “discovered” by Frenchman Jean Ribault in 1562. In 1565, Spanish forces drove out

the French and took control of Northeast Florida, establishing a mission on the island and renaming it Isla de Santa Maria. In the early 18th century, the British named the island “Amelia Island”, established a small settlement, and attempted to buy it, but the Spanish refused until the Treaty of Paris in 1763, when the Spanish traded Florida for control of Havana, Cuba. During the Revolutionary War, loyalists from South Carolina and Georgia fled to the island, and many used it as an embarkation point to return to England. The Second Treaty of Paris, in 1783, returned Florida to the Spanish. In 1811, the town of Fernandina was established, named for King Ferdinand of Spain.

In 1812, a group of Americans calling themselves the “Patriots of Amelia Island” attempted to seize control of Amelia Island. President Madison sent in troops, who raised the American flag at Fernandina, but fears of sparking a war with Spain led the president to withdraw the troops early the next year, returning the island to Spanish control. However, this was not the last insurgency on the island. In 1817, Gregor MacGregor led a small army in an attack on Fort San Carlos, the Spanish fort at Fernandina, and raised his own flag, the Green Cross of Florida. MacGregor hoped to conquer Florida, and his troops fought the Spanish in the Battle of Amelia Island. The Americans joined forces with a pirate, who claimed the island on behalf of the Republic of Mexico, before finally surrendering to the United States.

Named for Princess Amelia, daughter of George II of Great Britain, the island has changed hands between colonial powers a number of times. It is claimed that eight flags have flown over Amelia Island: French, Spanish, British, Patriot, Green Cross, Mexican, Confederate, and United States.